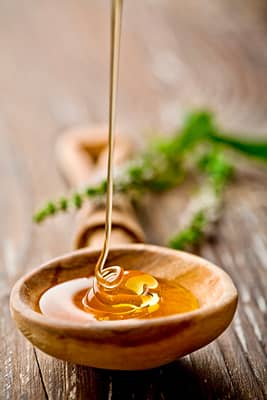 Combined Together In Jar -

* Do not give to children under one year of age.

* Consult health physician before use. Thyme contains antiseptic compounds such as caryophyllene, camphene, and thymol.

Thyme is one of nature's most potent antimicrobials, with its carvacrol content inhibiting the growth of a plethora of harmful bacteria.

Carvacrol and Thymol are strong anti-spasmodic and potent cough suppressants that help immensely with respiratory health.

The antibacterial and expectorant qualities of this herb, thin the mucus while gently healing and soothing the bronchial tract.

Lemons contain Vitamin C, which significantly helps with immunity and supports to neutralize free radicals dwelling in our bodies.

Lemon also stimulates the production of white blood cells, may help protect the integrity of immune cells, as well as protects leukocytes, which produces antiviral substances.

Turmeric is a flowering plant, Curcuma longa, and is part of the ginger family, Zingiberaceae.

Curcumin is the main active ingredient in Turmeric as well as the most important and gives tumeric its bright yellow, fluorescent color sometimes called curcuma.

Curcumin also contains very potent antioxidants and has powerful anti-inflammatory effects. And are responsible for giving Turmeric its medicinal properties.

Ongoing studies have shown Turmeric to be an Omega-3 booster, as well as showing hopefulness in providing protective benefits to regress the effects of diseases, such as Arthritis and Alzheimer's, by increasing the brain-derived neurotrophic factor (BDNF), a hormone that functions in your brain that these diseases deplete.

However, Turmeric is also known for having poor bioavailability, therefore not absorbed well in the body alone.

Henceforth when combined with black pepper extract (that contains a compound called piperine), it increases the absorption of curcumin up to an astonishing 2,000%.

In conclusion, when Turmeric and black pepper extract are used simultaneous, the overall health effects of curcumin are increased dramatically, as well as significantly desensitizing the pain receptors in the body.

All Honey carries fantastic health benefits when kept in its natural state. When honey is processed and heated, their healthy therapeutic medicinal properties are pretty much gone leaving it to be just a sweetener. As always raw, unfiltered, and unheated honey is best!

Raw Honey protects against damage that's caused by gram-negative bacteria and boosts the production of specific cells that repair the damaged tissue caused by infection. Honey also encompasses anti-inflammatory properties that can quickly ease pain and inflammation. However, the potency of all honey is significantly different.

Studies on mānuka honey have shown to have higher therapeutic properties (next to Fynbos honey), including bacterial properties compared to over 300 varieties of honey. That alone is incredible!

The antibacterial component in Mānuka honey is methylglyoxal (MG). Methylglyoxal is a compound that's found in all honey, although in smaller quantities.

* When there is a high concentration of MG, the stronger the antibiotic effect will be, as well as the higher the UMF, the better the quality of mānuka honey, UMF 30+, if possible.

This website uses cookies to improve your experience while you navigate through the website. Out of these, the cookies that are categorized as necessary are stored on your browser as they are essential for the working of basic functionalities of the website. We also use third-party cookies that help us analyze and understand how you use this website. These cookies will be stored in your browser only with your consent. You also have the option to opt-out of these cookies. But opting out of some of these cookies may affect your browsing experience.
Necessary Always Enabled
Necessary cookies are absolutely essential for the website to function properly. These cookies ensure basic functionalities and security features of the website, anonymously.
Functional
Functional cookies help to perform certain functionalities like sharing the content of the website on social media platforms, collect feedbacks, and other third-party features.
Performance
Performance cookies are used to understand and analyze the key performance indexes of the website which helps in delivering a better user experience for the visitors.
Analytics
Analytical cookies are used to understand how visitors interact with the website. These cookies help provide information on metrics the number of visitors, bounce rate, traffic source, etc.
Advertisement
Advertisement cookies are used to provide visitors with relevant ads and marketing campaigns. These cookies track visitors across websites and collect information to provide customized ads.
Others
Other uncategorized cookies are those that are being analyzed and have not been classified into a category as yet.
SAVE & ACCEPT
Skip to Recipe Skip to content