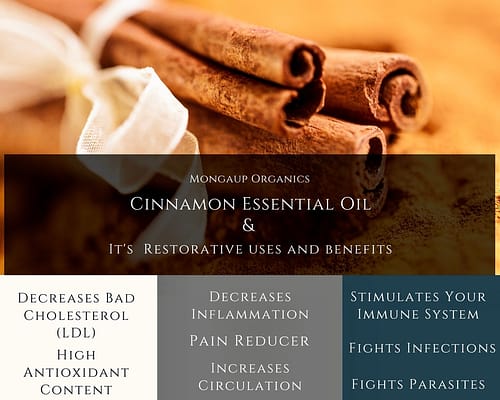 If you’re looking for an essential oil that can promote relaxation and offer a range of health benefits, consider adding cinnamon bark oil to your aromatherapy collection.

Cinnamon bark essential oil (CINNAMON VERUM) is derived from the bark of the Cinnamomum tree. This tree is native to Sri Lanka, India, and Vietnam. It has a wide range of benefits that can be attributed to its unique composition.

The main ingredient in cinnamon bark oil is cinnamaldehyde, therefore, responsible for its characteristic smell. This compound has antibacterial, antifungal, and anti-inflammatory properties, making it effective against various skin conditions. Cinnamon bark oil can also be used to relieve pain, reduce inflammation, and improve circulation. In addition, cinnamon bark essential oil has stimulant properties that can help to boost energy levels and mental alertness. For these reasons, cinnamon bark essential oil is an excellent natural remedy for many ailments.

This oil has remarkable benefits and antibacterial properties, making it a safe, effective, and non-chemical additive alternative for cleaning with its strong germicidal properties.

The oil has a warm, spicy aroma and is used in aromatherapy to promote feelings of comfort and well-being. It helps to soothe and calm stressful emotions and enhance mood.

Using Cinnamon essential oil externally, Use certified organic, 100% pure, cold-pressed, unrefined oil such as Jojoba Oil. Mix two drops of cinnamon oil with two to three cups of carrier oil, such as Jojoba oil, and use for massage. *Cinnamon essential oil is very potent and can cause contact dermatitis and burn, so please take caution and use it with a carrier oil; If irritation occurs, stop immediately.

AS A FACIAL SCRUB

Mix it with cinnamon sugar, orange juice, and olive oil to create a rejuvenating scrub with antiseptic properties to effectively kill facial bacteria.

FOR A FOOT SOAK

Treat nasty fungal infections by mixing a drop of cinnamon leaf oil in a bucket of warm water, and then soak your feet in it. This application works great for athletes and people who wear closed shoes most of the day.

Ahh, the warmth and comforting scent of cinnamon filling your home. Many people enjoy the smell of cinnamon and find it very soothing and relaxing.

Cinnamon bark oil has a warm, spicy aroma that promotes feelings of comfort and well-being.

When used in aromatherapy, it can help to soothe and calm stressful emotions while enhancing your mood.

Cinnamon bark is a great natural cleaning agent. It has strong antibacterial and antifungal properties, making it great for cleaning surfaces in the kitchen and bathroom. Cinnamon bark is also a great way to freshen up your home naturally. Add a few drops of essential oil to a spray bottle filled with water, and mist the solution around your home for a refreshingly clean scent.

Cinnamon bark is also effective at repelling insects because it contains a natural chemical called cinnamaldehyde. This naturally occurring substance is known to be an irritant to mosquitos and other insects, making them less likely to land on or bite humans.

To create a homemade insect repellent spray using cinnamon bark oil, add a few drops of the oil to a small spray bottle filled with water. Then, mist your skin with the mixture whenever you’re outdoors to keep bugs at bay.

Did you know that the scent of cinnamon oil can deter pesky household insects, such as black ants, mosquitoes, roaches, and flies?

Studies found that it may even be more effective at repelling mosquitos than the toxic chemical DEET. Spray or diffuse the oil around your home. You can also spray it over your mattresses and sheets to eliminate bed bugs.

Join my newsletter for the most recent recipes, tips, and inspiration! #nospam

This website uses cookies to improve your experience while you navigate through the website. Out of these, the cookies that are categorized as necessary are stored on your browser as they are essential for the working of basic functionalities of the website. We also use third-party cookies that help us analyze and understand how you use this website. These cookies will be stored in your browser only with your consent. You also have the option to opt-out of these cookies. But opting out of some of these cookies may affect your browsing experience.
Necessary Always Enabled
Necessary cookies are absolutely essential for the website to function properly. These cookies ensure basic functionalities and security features of the website, anonymously.
Functional
Functional cookies help to perform certain functionalities like sharing the content of the website on social media platforms, collect feedbacks, and other third-party features.
Performance
Performance cookies are used to understand and analyze the key performance indexes of the website which helps in delivering a better user experience for the visitors.
Analytics
Analytical cookies are used to understand how visitors interact with the website. These cookies help provide information on metrics the number of visitors, bounce rate, traffic source, etc.
Advertisement
Advertisement cookies are used to provide visitors with relevant ads and marketing campaigns. These cookies track visitors across websites and collect information to provide customized ads.
Others
Other uncategorized cookies are those that are being analyzed and have not been classified into a category as yet.
SAVE & ACCEPT
Skip to content